During the first week of November 2016, I reported observing fairly severe leaf rust in rows of Jagalene wheat in Dr. Brett Carver’s breeder nurseries here at Stillwater.  About that time, leaf rust also was observed in the early planted variety-demonstration nursery planted in Stillwater by Dr. David Marburger.  The early planted plots were planted 13-Sep-2016.  For this variety-demonstration, Dr. Marburger plants a duplicate, later planted (26-Oct-2016) plot of each variety immediately in front of the early-planted plot.  This variety-demonstration nursery has provided an interesting observation of the effect of planting date on leaf rust as can be seen in Figure 1.

With cooler temperatures and light frosts we finally have received over the last 7-10 days, the older leaves infected with leaf rust in the early planted plots have mostly turned yellow.  Rust pustules are evident, but chlorosis (yellowing) is the predominate symptom.  Across all the varieties (>60), there is a range from nearly all yellow except the youngest leaves, to nearly all green (there is some tip yellowing/burning from the frosts). 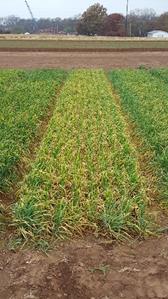 By comparison, look at the photo below (Figure 2) showing early planted plots (background) and late planted plots in the foreground.  Leaf rust is not found in the late planted plots (foreground).  If early planted wheat had been grazed, which would be more typical with a mid-September planting date, much of the rank foliage would have been removed and rust would not be nearly as severe as in this variety-demonstration.  This is a good example of how planting date can effect disease incidence and severity given an environment favorable for disease such as we have had this fall with mild temperature and occasional rain and dews. 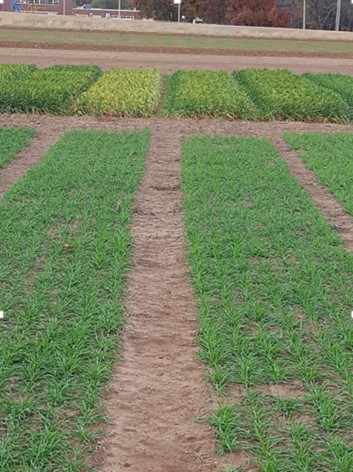 There are a couple of additional points I should make with the photos above.  First, not many would plant wheat in early to mid-September for the purpose of grain only.  Hence, wheat in the early planted plots would most likely be grazed, which would remove much of the rank foliage and also the rust, and thereby the rust incidence would not be nearly as severe.  Wheat in a grain-only mode would look more like the wheat in the late planted plots (foreground plots in Figure 2).  Second, we normally would have colder weather earlier than we had this year that would have arrested rust development.  Then, newly emerging leaves would be healthy and green.  As I have said previously, I am not a proponent of spraying in the fall to control fall foliar diseases such as leaf rust because leaf rust development typically slows and stops once we get to colder temperatures in November-January (basically <60 F with frosts at night).  And remember, the primary concern with fall leaf rust is that with a mild winter and sufficient moisture, the rust will survive through the winter and inoculum will be present in fields to start the disease early in the spring.  Hence, monitoring of fields through the late winter and early next spring is recommended to see if application of a fungicide to control rust is indicated in the early spring.  For all the foliar wheat diseases (leaf rust, stripe rust, powdery mildew, tan spot, and septoria leaf blotch), control in the spring is more critical then control in the fall.  I have heard of fungicide being added in with a fall herbicide application to limit disease, but such an application would have needed to have been applied 3-4 weeks ago to prevent the situation as depicted in the photos above.  However, I can see where in a year such as this one with a fully susceptible variety that was planted early and not grazed there may be value to an early fungicide application.  BUT ESPECIALLY, watch these fields starting in late February to see if an application is merited because control of foliar diseases in the spring is much more critical than control in the fall.