Foliar diseases such as leaf rust and stripe rust were scarce across Oklahoma last fall and into 2018 because of the drought. I have seen a few leaf rust pustules on wheat plants in trials around Stillwater and have heard of leaf and stripe rust as well as powdery mildew from growers across the state. However, my observations and these reports all indicate extremely light levels. More importantly, reports of foliar diseases from Texas were lacking until recently. These reports are critical because areas in Texas provide the inoculum for Oklahoma. On February 9th, Dr. Clark Neely (Small Grains/Oilseed Extension Specialist; Texas A&M AgriLife Extension) reported seeing stripe rust on the susceptible variety ‘Patton’ in trials near Uvalde, TX (Fig 1). Here is Dr. Neely’s report: “I wanted to notify everyone that we have our first stripe rust siting in Uvalde, TX as of last Friday (02/9/18). At the time, it was mainly limited to the susceptible border rows (‘Patton’). A few leaf rust pustules were present as well, but very few. Growth stage is around Feekes’ 5 with some already initiating jointing at Feekes’ 6. Central and South Texas has been experiencing very damp, overcast conditions for the past week and are expecting more of the same for the foreseeable future, so I would expect to see further development. Variety trials at Castroville, College Station, Thrall, Hillsboro, McGregor, and Muenster, TX have all appeared clean so far over the past couple of weeks while topdressing nitrogen.”

Remember, stripe rust typically forms stripes in older plants (Fig 2A), but early infections have pustules not typically in stripes (Fig 2B). In contrast, pustules of leaf rust are not formed in stripes and are more of a brownish-rust color as compared to the yellowish-golden rust color of stripe rust (Fig 2C).

Figure 2. Wheat stripe rust on adult plant (2A), an initial stripe rust infection in February (2B), and a wheat leaf with both stripe and leaf rust pustules (2C). 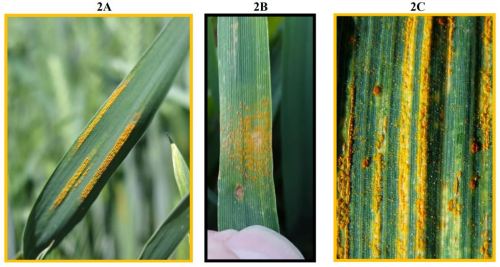 Other foliar diseases to watch for include tan spot, Septoria leaf blotch, and powdery mildew (Figure 3A-C). These diseases (especially tan spot and Septoria leaf blotch) are more likely to occur in no-till, continuous wheat fields. If sufficiently severe in a no-till field, spraying for these in March may be beneficial but only if young wheat plants are severely spotted with one of these diseases. Regarding leaf and stripe rust, there was not much rust overwintering in Oklahoma, and inoculum to start this disease in the spring will mostly come from Texas.

Finally, the recent rain events in Oklahoma will revive the wheat in the state, but also will provide conditions favorable for foliar diseases (especially as temperatures become more moderate). Hence, I recommend scouting fields for the foliar diseases discussed above during the coming weeks and paying attention to what is happening to the south of us in Texas. For additional information regarding early season foliar wheat diseases and possible control with an early fungicide application, please see our fact sheet (PSS-2138) that discusses split application of fungicides at www.wheat.okstate.edu.

By David Marburger in Uncategorized on February 22, 2018.
← Determining the optimal time to remove cattle from wheat pasture (if you still have pasture to graze…) First Hollow Stem Update – Week of 2/26-3/2 →