Although not as obvious as in previous weeks, powdery mildew is still hanging on in Oklahoma, and has even moved up onto the heads in some fields. One such field is my foliar fungicide trial here at Stillwater. Examining this trial yesterday revealed many of the lower heads were lightly to moderately infected with powdery mildew (Figure 1). This is one of the few times I have seen powdery mildew move onto wheat heads in Oklahoma. It is important to note that these infected heads are the ones produced on the lower tillers beneath the main, taller tillers. I did not find any powdery mildew on any of the higher heads. This appears to me to be a light to moderate infection severity, but I have not had a lot of experience with powdery mildew on wheat heads, so this is just my estimation. Exactly how much of an impact this powdery mildew will have on yield and test weight may be hard to determine because the level of powdery mildew on these heads seemed to be fairly constant across all treatments.

Yesterday, I also observed leaf rust on scattered leaves in the foliar fungicide trial at Stillwater (mostly in the not-sprayed control plots). Typically this was just a couple pustules scattered on a leaf, but there were a few leaves as shown in Figure 2. If you enlarge Figure 2, you can see what looks like the remnant of stripe rust stripes with a few telia (small black dots) associated with the stripes. There also appears to be a pustule or two of powdery mildew. As indicated, leaves infected to this level were not common, but this does indicate that leaf rust is starting to appear and may increase a bit over the next 7-10 days. However, this is a late infection as this trial is at late milk to early soft dough. Hence, the leaf rust will have only a minimal impact on yield even if it does increase significantly.

Figure 2.  Leaf rust on a flag leaf at Stillwater, OK on May 16, 2018. Note that some inactive stripe rust also is visible in the center of the leaf (you will have to enlarge the photo to see this) but it appears to be “shutting down” as indicated by the small, black telia. A lesion or two of powdery mildew also is present. 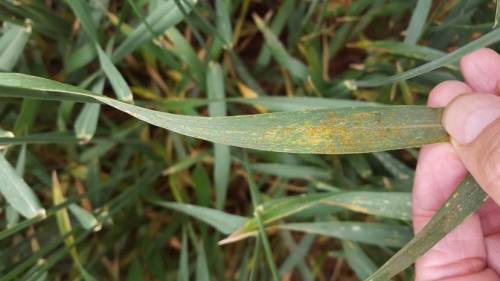 Finally, Brad Babek (County Educator, Washita County in southwestern Oklahoma) reported increasing areas of white heads in wheat fields (Figure 3). In cases where I have observed such heads this year, it has been due to dryland (Fusarium) root rot. Typically the roots will be rotted and often the lowest part of the stem is discolored (dark) and often there is a pinkish-purple color associated with the lower tiller and roots. Splitting such a tiller often reveals a stem filled with white or pinkish-white fungal growth (Figure 3). 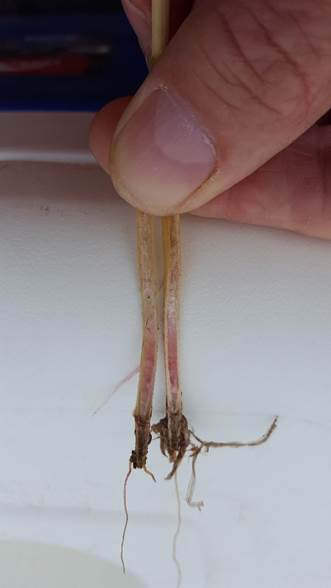 By David Marburger in Uncategorized on May 18, 2018.
← Wheat Disease Update – May 5, 2018 2018 Oklahoma Wheat Harvest Begins in South and Central Oklahoma over the Memorial Day Weekend →