Widespread leaf spotting symptoms in wheat in the variety trial near Chickasha, OK (40 miles southeast of Oklahoma City) now is believed to be caused by bacterial streak (aka black chaff – see pictures below).  Bacterial streak/black chaff is occasionally observed in Oklahoma but typically is not widespread or severe.  This disease is more severe in warm (80 F or so) and humid climates or in wheat grown under irrigation, and often appears after an event such as a late freeze or other event that can cause wounds to facilitate entrance of bacteria into plants.  Lesions on leaves initially appear water-soaked but become elongated dead bands and streaks as time proceeds. 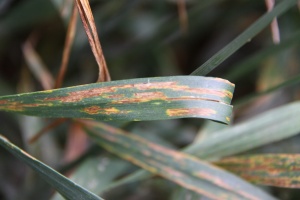 These dead areas tend to be more common on leaf “bends” where dew forms to enhance infection.  Symptoms on heads and on the stem immediately under the head include dark discoloration, and awns typically show a dark banding.These symptoms often can be confused with leaf spotting caused by the fungi Septoria (Septoria tritici blotch) or Stagonospora (Stagonospora nodorum blotch).

Bacterial streak/black chaff is seed transmitted, so grain from a badly infected field should not be kept for seed wheat.  There are no commercial seed treatments available, and although varieties vary in reaction to this disease, no resistant varieties are known in Oklahoma where bacterial streak/black chaff is not commonly widespread.  This disease may be occurring in other parts of Oklahoma this year, but will be difficult to discern from all the other factors that contribute to general browning and leaf spotting including other diseases (tan spot, septoria, etc), freeze, and drought. 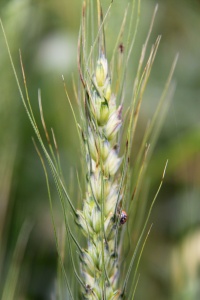