The stripe rust epidemic of 2015 is still fresh on the minds of many wheat farmers. Reports of active stripe rust on wheat in southern Oklahoma has producers now wondering if we are in for a repeat in 2016. While it is too early to tell if environmental conditions will favor a stripe rust outbreak in 2016, having active rust on wheat in the area satisfies at least one of the requirements for an epidemic. Most Oklahoma wheat producers will still be best advised to monitor the situation and make the fungicide decision based on yield potential and likelihood of infection when the flag leaf is emerging. Those with fields already showing heavy infection of foliar disease, however, might also benefit from a two-pass fungicide system. A few talking points and items to consider for those considering a two-pass system are posted below. A fact sheet on the topic of split application of fungicides can be found at www.wheat.okstate.edu

When to apply – The first pass in a two-pass fungicide system should be applied just after jointing. Please note that this is well after topdress nitrogen should be applied. For this and other reasons (see Dr. Arnall’s blog), tank mixing fungicides with nitrogen is generally not a good practice. Remember that the purpose of the early fungicide application is to keep disease in check until you come back with a flag leaf application in April. Going too early can result in too large of a gap between applications and enough time for disease to re-establish. Going too late can reduce the return on investment. Timing is everything with fungicides.

How much to apply – Back in the day, the discussion around split fungicide application centered on half rates for the first application. This recommendation was because of cost savings rather than disease management. The availability of low-cost, generic fungicides, though, has changed our philosophy, and a full rate of a low cost fungicide is the standard for split applications.

Which product to choose – Product choice is at the discretion of the consumer. If you are considering how to best spend your season-long fungicide budget, however, I would strongly recommend saving your “best” and perhaps most expensive product for the flag leaf application. 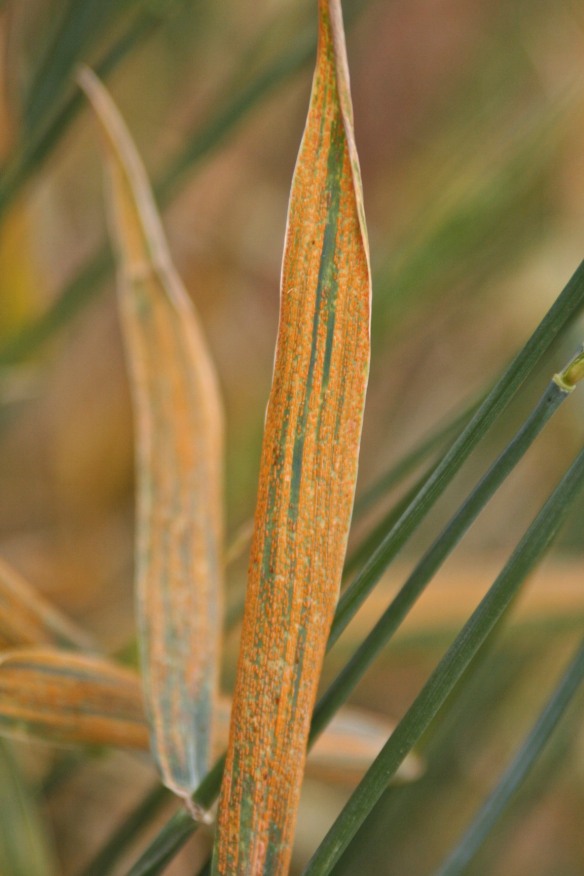 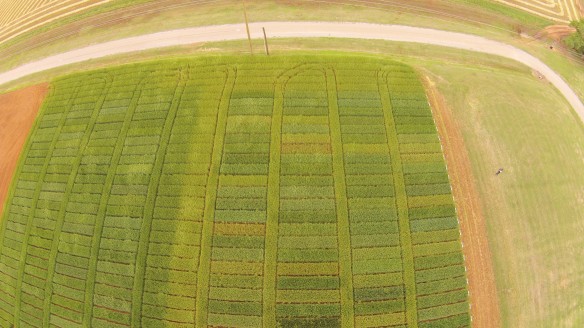 This overhead shot of the 2015 Chickasha intensive and standard wheat variety trials illustrates the severity of stripe rust in the region. The intensively managed trials on the left was treated with a fungicide just prior to heading. The standard trial on the right has the exact same varieties but no fungicide. The “middle” replication between the two studies is a border of Ruby Lee that is 1/2 treated 1/2 non treated.

1 thought on “Is this the year for split fungicide application?”