Normally, I would be sounding the wheat topdress alarm in early January. When you have 5.5 million acres to cover, it is important to start early. However, this year we have mostly kept the topdress rigs in neutral with a wait and see approach due to the drought. The recent rain brought life to portions of the Oklahoma wheat belt and it is time to make a decision regarding topdress nitrogen. I have posted three slide presentations with audio regarding topdressing wheat at my YouTube channel available by clicking here or by searching YouTube for OSU Small Grains. I have listed some additional facts and items to consider below.

I thought I would share a couple of visual greenness maps sent to me by JD Carlson in Biosystems and Ag Engineering. These are from the Oklahoma Mesonet fire danger model site and provide a visual estimate of green vegetation for mid January 2012 (top) and 2013 (bottom). Note the stark contrast in greenness throughout the wheat belt of western Oklahoma. As indicated in the 2013 map, there are some small pockets of wheat with ample stands and average yield potential, but these are not large enough to make up for all of the red.

It finally rained! Rainfall totals in western Oklahoma (0.1 to 0.3 inches) will not put a dent in the drought, but were probably enough to induce germination of seed resting in dry soil. Oklahoma weather is extremely variable, and who knows when temperatures will warm enough to spur along the germination process. If we retain the recent moisture and have something close to a “normal” year, it is likely that we will see wheat popping through the soil in mid February. I compared February sown winter wheat to spring wheat in a trial at Newkirk, OK a few years ago. The winter wheat made about 15 bu/ac and the spring wheat made about 20 bu/ac. This was in a favorable year that was not plagued by drought. Given current weather trends, a best case scenario for February emerging winter wheat is 50% of normal yield. A worst case scenario is 0 – 10% of normal yield. If I were wagering, I would place my money on 20 – 30% of normal yield potential.

The rainfall might be enough to help emerged wheat west of I-35 survive, but that is about it. Soil moisture is still insufficient to produce a recovery and I would still proceed cautiously regarding inputs on these acres. The rain might have indeed been too little, too late for these acres. IF soil moisture gets recharged by mid February and IF we have a mild spring these acres could have some secondary tillering and make a moderate recovery; however, the odds are against this scenario. 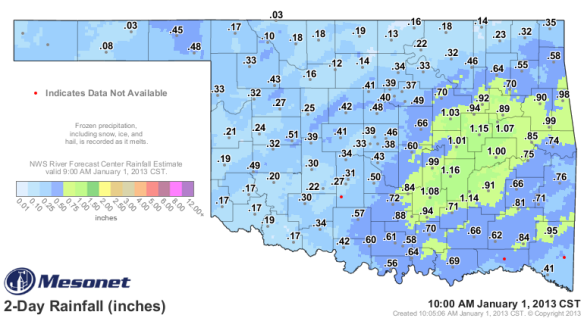 It was too nice of a day to stay in the office yesterday, so I checked on our wheat variety plots. I started at McLoud, moved west to Kingfisher, and ended up at Marshall. As indicated by the pictures and captions below, neither the wheat nor my mood improved as I traveled west. I am sure if I had traveled farther west, this would have gotten worse. The bottom line is that we are in desperate need of moisture in Oklahoma. Early-sown wheat is backpedaling quickly and cannot hold on too much longer. Much of the later sown wheat has yet to emerge. We are certainly not on our way to a record year, but everything could still turn out okay……..if it rains.

Wheat at McLoud, OK on 11/20/2012 with three large tillers and three additional tillers initiated. This wheat is on its way to top yield potential.

This field north of Kingfisher on Hwy. 81 was likely sown around October 20, but never received enough moisture for complete emergence. The seed is still viable, but even if it rains now the effective planting date would be late November

This is September-sown wheat at the Wheat Pasture Research Unit near Marshall, OK. With adequate moisture this wheat would likely have 8 – 10 healthy tillers by today. Due to the drought, it has three small tillers that are barely hanging on.