Too little, too late?

It finally rained! Rainfall totals in western Oklahoma (0.1 to 0.3 inches) will not put a dent in the drought, but were probably enough to induce germination of seed resting in dry soil. Oklahoma weather is extremely variable, and who knows when temperatures will warm enough to spur along the germination process. If we retain the recent moisture and have something close to a “normal” year, it is likely that we will see wheat popping through the soil in mid February. I compared February sown winter wheat to spring wheat in a trial at Newkirk, OK a few years ago. The winter wheat made about 15 bu/ac and the spring wheat made about 20 bu/ac. This was in a favorable year that was not plagued by drought. Given current weather trends, a best case scenario for February emerging winter wheat is 50% of normal yield. A worst case scenario is 0 – 10% of normal yield. If I were wagering, I would place my money on 20 – 30% of normal yield potential.

The rainfall might be enough to help emerged wheat west of I-35 survive, but that is about it. Soil moisture is still insufficient to produce a recovery and I would still proceed cautiously regarding inputs on these acres. The rain might have indeed been too little, too late for these acres. IF soil moisture gets recharged by mid February and IF we have a mild spring these acres could have some secondary tillering and make a moderate recovery; however, the odds are against this scenario. 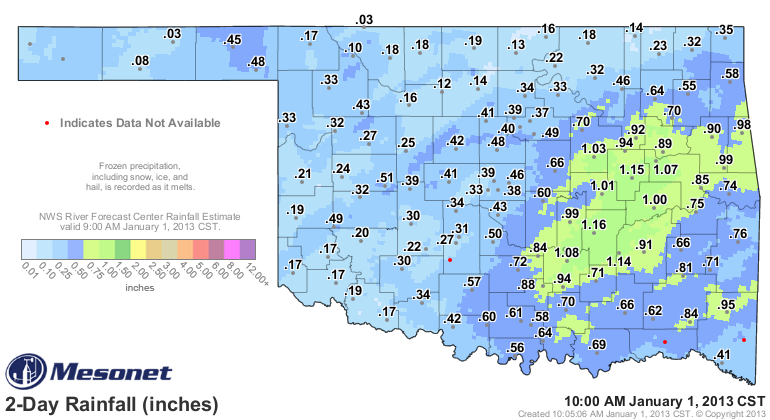 The drought is worsening and forage is getting harder and harder to come by. Crop residue that was once considered of little nutritional value for livestock has become a staple for Oklahoma cattle producers with depleted pasture and hay reserves. John Holman with KSU in Garden City indicated that grazing of sorghum stalks has become commonplace in western KS as well. Some crop residue can be removed without significant damage to long-term gains in soil structure associated with no-till, but overgrazing can lead to some real problems when the wind comes sweeping down the plain.

Wind erosion is commonly thought of as a conventional-till problem, but in an email exchange, Jason Warren recently indicated that there are a few scenarios where wind erosion could actually be worse in no-till than conventional till. No-till results in a relatively smooth, flat soil surface that, in the absence of residue, has few barriers to slow the wind. So, if we have an easily detached soil type (i.e. a sandy soil), a flat surface, and no residue to hold the ground, then we have a recipe for wind erosion. The same would be true for no-till wheat pasture that has been overgrazed. In a wind-erosion-fighting battle royale, I still prefer no-till to conventional till. However, no-till is not immune to wind erosion and it is important to keep some cover on the soil.

Aside from soil protection, it is important to remember that crop residues have value as reservoirs of nutrients.  An estimate of nutrient removal of grain, fiber, and forage crops can be found on one of Brian Arnall’s Pete Sheets at http://npk.okstate.edu/petesheets If the cattle are grazing the residue in-field, most of the nutrients will be returned to the soil. If the residue is being baled, the nutrients are leaving with the hay bales. You can estimate the value of these removed nutrients using the linked Pete Sheet and current fertilizer prices. 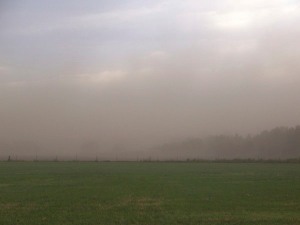 No-till practices to not make soil immune from wind erosion. Adequate cover must be maintained.