This blog post is an excerpt from the 2014 OSU Small Grains Variety Performance Tests report, which is available at http://www.wheat.okstate.edu or by clicking here.

The multi-year drought never released its stranglehold on western Oklahoma during the 2013-2014 wheat production season. Small rains here or there allowed most producers to obtain an acceptable stand of wheat, but moisture was never sufficient to spur tillering or leaf area development. Early winter snowfall made for a few bright spots for forage production in southwestern Oklahoma, but this moisture was quickly utilized by growing wheat plants and dry conditions soon returned. As a result, many fields in southwestern and western Oklahoma were abandoned and not taken to harvest. 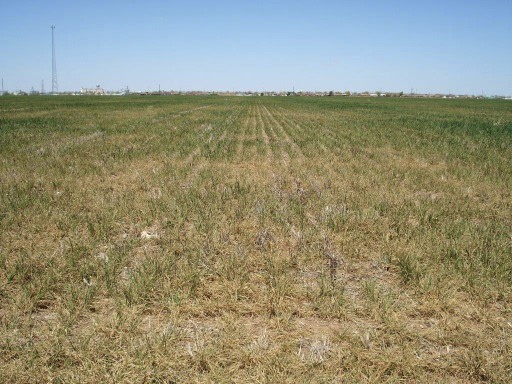 This photo of a wheat field near Altus, Oklahoma in April 2014 shows the level of devastation from the extreme, multi-year drought. Most wheat fields in this region were abandoned due to drought. 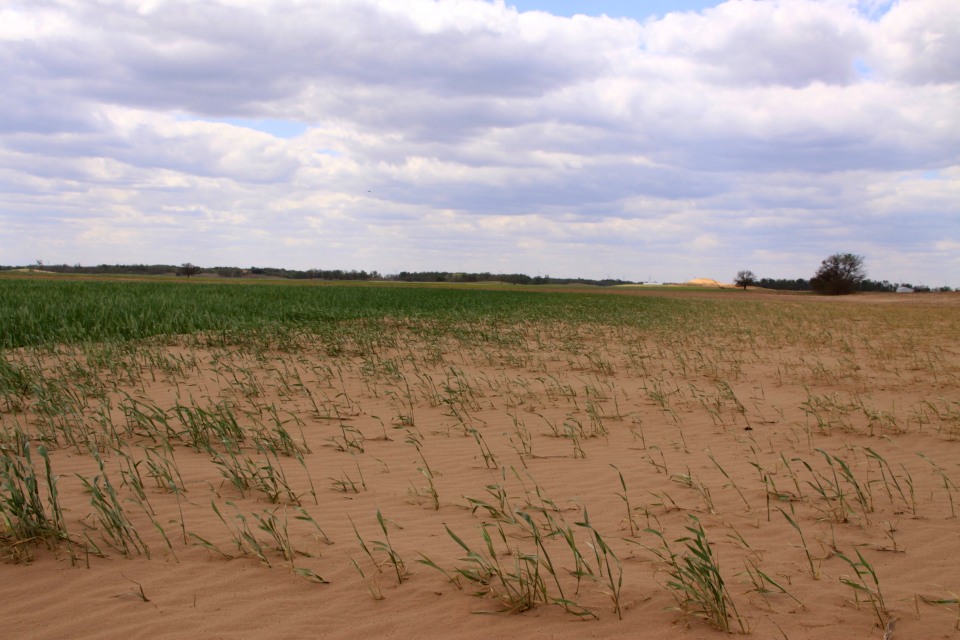 The winter of 2013-2014 wasn’t just dry; it was cold too. Young, drought-stressed wheat plants had difficulty dealing with the cold, windy conditions, and winterkill was common in late-sown wheat. Winterkill was also common in grazed wheat that was stressed by heavy grazing pressure and inadequate soil moisture. Considerable winterkill was also present in no-till wheat without adequate seed to soil contact in northwestern Oklahoma. The inadequate seed to soil contact was generally the result of heavy residue from the previous year’s wheat crop. 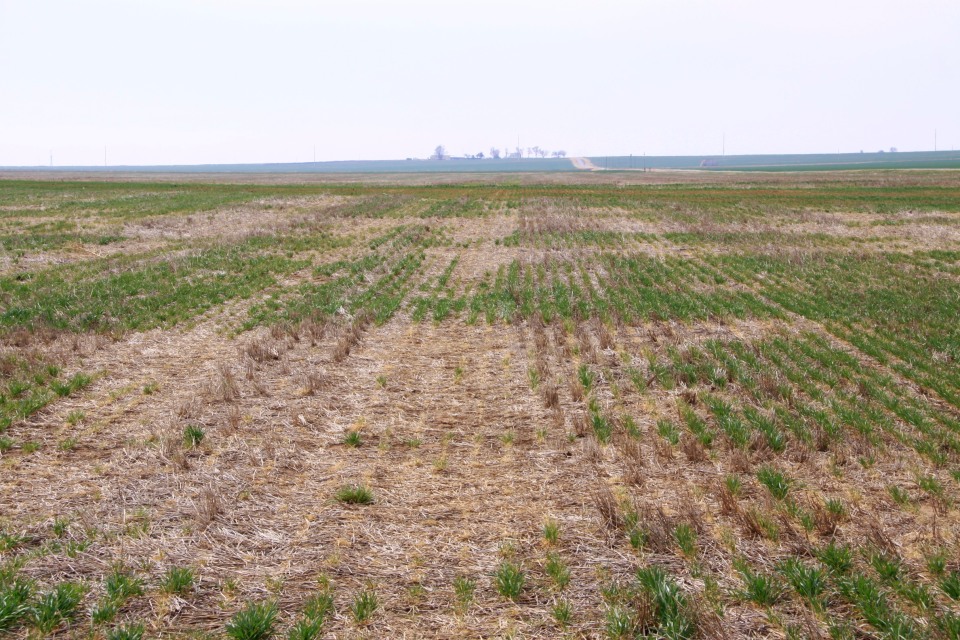 Winterkill was common in northwestern Oklahoma, with the greatest injury occurring in no-till and/or grazed wheat fields. 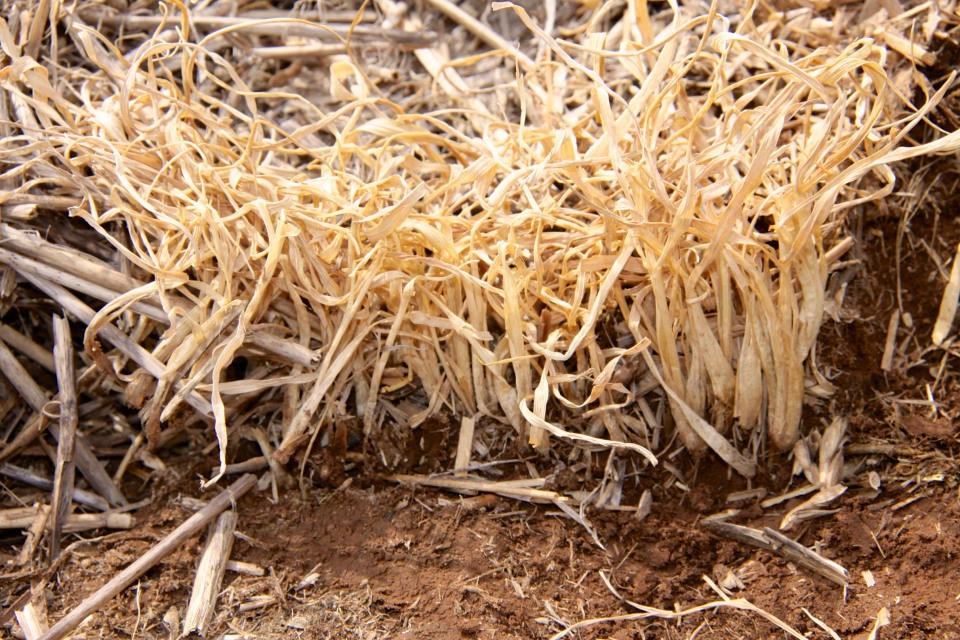 Closer inspection of some no-till fields with winterkill revealed shallow seed placement due to heavy and/or unevenly spread residue from the 2103 wheat crop.

While the wheat crop did not appear to be on its way to bumper production, most producers hoped for a turnaround similar to 2013 and topdressed in late winter. Unlike the spring of 2013, however, the rains never came and much of this topdress N applied did not make it into the soil until the crop was at boot stage or later.

The cold winter delayed the onset of first hollow stem by about five days as compared to 2013 and 25 days as compared to 2012. Despite a slow start to the spring, wheat in southern Oklahoma was near heading when a hard freeze occurred the morning of April 15, 2014. As expected, drought stressed wheat in advanced stages in southwestern Oklahoma suffered severe freeze damage; however, injury from the 2014 spring freeze did not always follow the “rule of thumb” guidelines used by agronomists. Many areas that received small amounts of rain just prior to the freeze seemed to escape widespread injury, regardless of growth stage. In southcentral Oklahoma, injury seemed to be most severe on later maturing varieties that were approximately Feekes GS 7 to booting, while earlier-maturing varieties that were just starting to head escaped freeze injury. Wheat that was barely past two nodes in northern Oklahoma suffered severe injury, while more advanced wheat in central Oklahoma endured similar temperatures with minimal injury.

There were relatively few insect or disease issues to deal with during the 2013-2014 wheat production season. Winter grain mite and/or brown wheat mite infestations proved to be too much for some drought stressed wheat fields in northcentral and northwestern Oklahoma. Some fields already devastated by the drought were left unsprayed, while others still showing some sign of yield potential were treated. 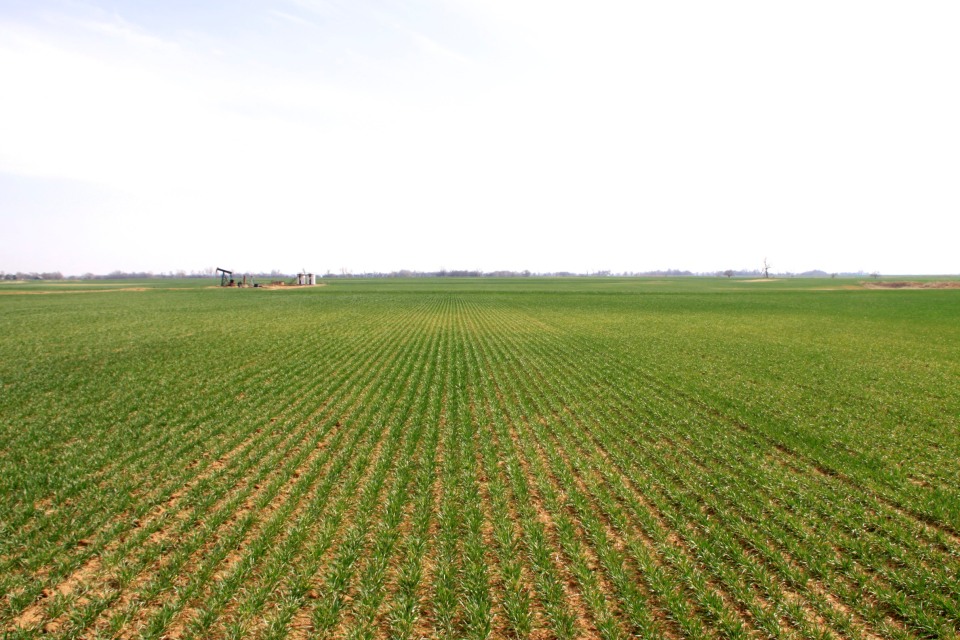 Injury, such as the bronzed areas in the picture above, was the result of brown wheat mite and/or winter grain mite infestations in late winter.

Warmer temperatures in May hastened crop maturity and the Oklahoma wheat harvest began near Frederick on May 22, 2014. By the first week of June, harvest was in full swing, only to be delayed by rain shortly thereafter. Harvest resumed across most of the state by June 13 and was mostly completed by June 30. The exceptions being some waterlogged areas in northern Oklahoma. The Cherokee Mesonet site, for example, reported 5.1 inches of rainfall from October 1, 2013 to May 31, 2014, but the same site received 10 inches of rain from June 1 to June 30, 2014.

The photo below is from our wheat variety trial at Kildare. As you can see there is significant yellowing in some of the plots. Our first thoughts were that either wheat soilborne mosaic virus and/or wheat spindle streak mosaic virus were causing the symptoms; however, the yellowing was present in many varieties that are resistant to both these diseases. The Disease Doctor, Bob Hunger, collected samples for analysis in the OSU Plant Diagnostic Lab. Tests showed that wheat streak mosaic was the culprit. 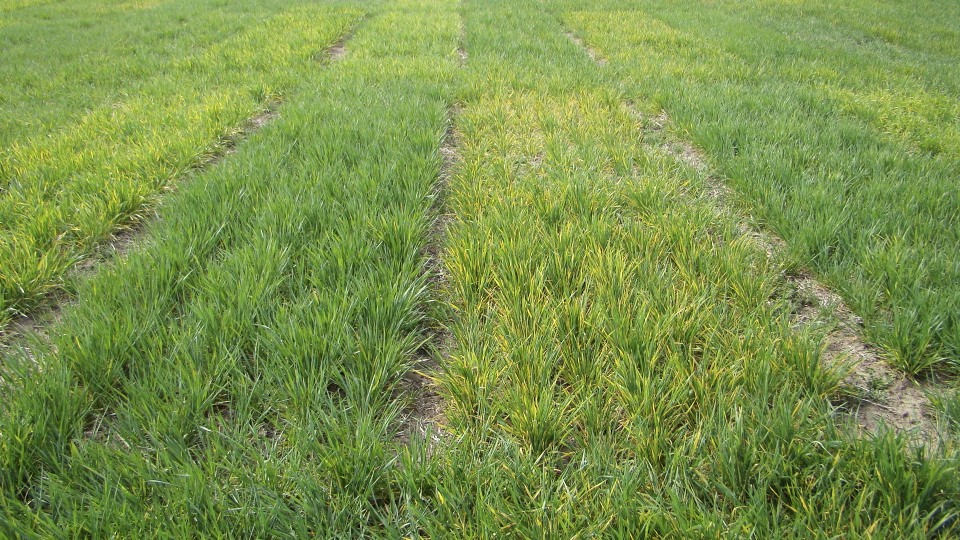 Wheat streak mosaic virus is responsible for yellowing at our Kildare variety trial. All varieties are affected by the disease, but as shown in this picture the severity of the reaction differs somewhat by variety.

We are facing this problem because I did not follow my own recommendations. While the plot area was mostly clean at the time of planting, there was some volunteer wheat present. We planted anyway and sprayed glyphosate right after planting. In the past wheat streak mosaic virus was primarily a northwestern Oklahoma issue and we could get by with late burndown on wheat ground in central Oklahoma. Our Kildare plots are a prime example that this is no longer the case. We have to control volunteer grasses (wheat, corn, grain sorghum, etc.) in a manner that will break the green bridge for at least two weeks prior to planting.

So, what is next for our plots at Kildare? There are some variety differences in reaction to the wheat streak mosaic virus. We will rate plots and include this information in our wheat variety comparison chart. I anticipate the plots will continue to go downhill and it is yet to be determined whether or not we will be able to harvest useable data from the location. We will certainly try again next year and apply our turndown earlier.

Oklahoma:  Over the last week I, Nathalia Grachet (OSU graduate student), and Brian Olson (OSU A&P) extensively looked at wheat around Stillwater, and in central (Minco, Apache), southwestern (Granite), and north central (Lahoma) Oklahoma.  Additionally, OSU Wheat Breeder Brett Carver examined his plots at numerous locations in central, southwestern OK as well as at Stillwater, and Dr. Art Klatt (OSU Wheat Geneticist) examined trials around Stillwater and Perkins.  Wheat in southwestern Oklahoma was damaged from drought and freeze, and little disease was discernible.  Wheat in southwestern Oklahoma (where it was possible) appeared to be at various states of head emergence, and in a few cases was just starting to flower.  In central OK, wheat was in various stages of heading.  Around Stillwater, wheat was just starting head emergence, while at Lahoma wheat was mostly just approaching GS 10 (boot stage).  However, there seems to be quite a bit of variability regarding stage of maturity depending on variety and planting date.

No leaf rust was observed at any location.  The “hot spot” of stripe rust we found at Minco is still active, but my previous update incorrectly identified ‘Duster’ as the variety with the most severe stripe rust.  Actually that was ‘Garrison’.  Stripe rust also was on Duster but not to the same severity nor was significant stripe rust on the flag leaves of Duster.  This is the only location where we observed significant stripe rust.  We also observed powdery mildew and leaf spotting on lower to mid leaves at many locations.  Primarily the leaf spotting appeared to be septoria/stagonospora with some tan spot mixed in, and as expected is usually somewhat more severe in no- or low-till fields.

Barley yellow dwarf was commonly observed at many locations with variable severity, but it was often difficult to differentiate damage between BYD, freeze, and drought.  Wheat streak mosaic also was observed across the areas examined (see photo below).  An increasing number of samples from around western OK have kept Jen Olson (Plant Disease Diagnostician) busy.  Most of these samples have tested positive for BYDV, WSMV, or both, but no high plains virus or Triticum mosaic virus has been detected.  This includes the Stillwater area where I have never before (since 1982) observed WSM.  Another interesting find here at Stillwater included occurrence of Russian Wheat Aphid, which was confirmed by Dr. Rick Grantham (Director of the Plant Disease and Insect Diagnostic Lab –  photos below taken by Rick). 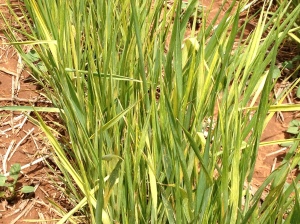 Wheat showing symtoms of Wheat Streak Mosiac Virus. There are no curative sprays for this virus, but it can be avoided by ensuring volunteer wheat and other grasses are dead at least two weeks prior to planting 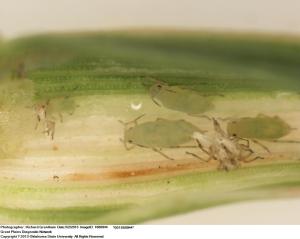